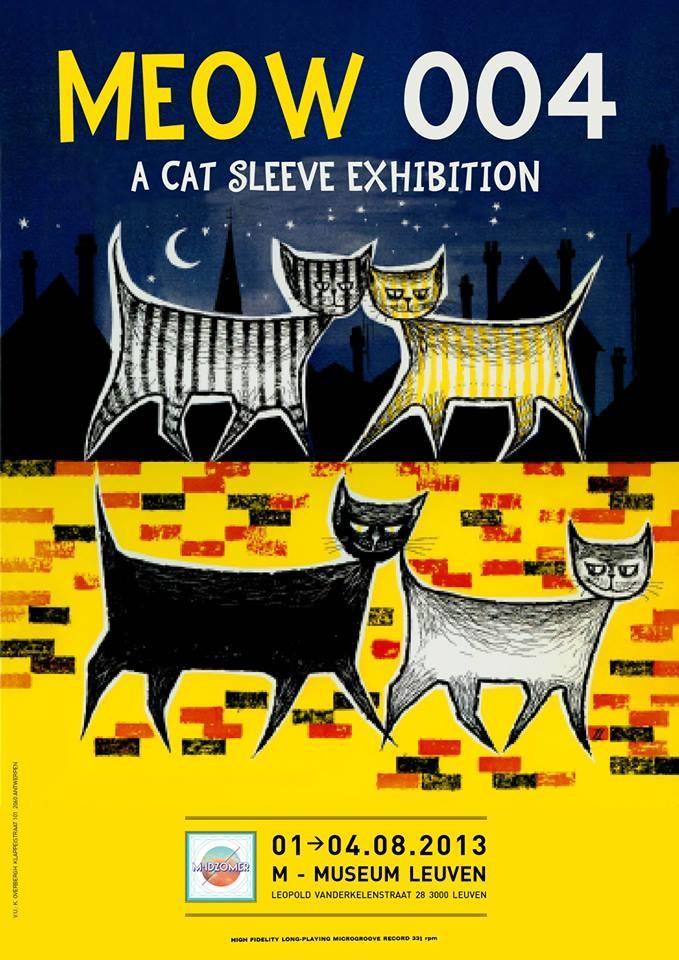 In 2013, following my involvement in the Meow exhibition, I was interviewed by a journalist from Le Vif l’Express, one of the major French language national paper in Belgium (a bit like the Observer here) about the place of cats in art and specifically album covers – it IS a bit of a trend!

Here’s said article, featuring the Kittles – I love that at the bottom of the page, my drawing is in good company: Banksy and Charlotte Gainsbourg!

Ans as it’s in french, here’s a translated version of the article

Revered by the Egyptians, demonized in the Middle Ages by Europeans (perceived as the devil’s spawn, only useful at hunting mice), only to receive consideration and honors from the eighteenth century (becoming the romantic animal par excellence, mysterious and independent), cats are definitely in fashion these past few years. Lolcats, these more or less fun subtitled photos, pollute social networks and have made cats the biggest stars on the internet. Cat cafes, imported from Japan and Taiwan, where the first was created in 1998 – open in Paris and London…

Kurt Overbergh, artistic director of the Ancienne Belgique, even goes as far as collecting album covers featuring griffons. “My ex-girlfriend and I had two cats at home. And when she became allergic, we had to give them away. It was horrible. They were somehow part of the family. Wehn I noticed cats on the back cover of Nick Cave’s first album and on the Beastie Boys’ The Sound of Science, I started to hunt album covers down.”

Kurt has more than 500 today. Divided into 70 categories. “Cat Woman”: Women who hold cats. “Addicted to cats”: bands who cram cats in all their artwork, from Psapp to  Fleet Foxes, through to Ladyhawke and James Yorkston. Or “Hard To Find Cats”: those that are difficult to detect, as on the cover of Chk Chk Chk’ Myth Takes.

Cats have enjoyed a close relationship with the world of music since times immemorial. They have inspired composers (Banchieri, Farina and Henze), musicals (Cats), popular songs (‘La mere Michel) but also lots of rockers … “You can’t become a cat’s master.  It’s a very independent animal. A lot of indie labels have also been named after cats, like Fatcat …”. A lot of artists too: Cat Power, Cat’s Eyes, Cat Stevens (the nickname that had slipped him a girl because he had cat eyes) …

According to the French veterinary Jean-Yves Gauchet, the father of purr therapy, interviewed by Le Monde, “purring cat emits sound vibrations soothing and beneficial, a bit like music.” These vibrations have even been reproduced by physiotherapists to accelerate bone healing.

What interests Overbergh in cat sleeves is the object. “Two-thirds of these records, I have never heard. However,  I do DJ sets where I exclusively mix songs that refer directly to cats … What’s New Pussycat? Tom Jones, Three Cool Cats Coasters … ”

Kurt raised the subject with Mark Lanegan, Bonnie Prince Billy, Mercury Rev … “I thought I was the only idiot in the world to collect albums with cats on it, but I met this Japanese guy who has already published two books on the subject.”

If Overbergh is still at work on his own book, he does already have a manifesto, like Lars von Trier and Matthew Herbert (Personal Contract for the Composition of Music). Thus, the image of cats can only consist of a photo, a statue, an animation, painted or drawn and “not allowed are tigers, lions or leopards, even if they are part of the cat family.”

This sweet lunatic opened his first exhibition, Meow, in 2007 and has just completed the fourth. “Cats have only nine lives, so there will only be another five Meows. Afterwards, I do not know what I will do all these discs. Maybe I’ll sell them on eBay …” At Louvain, Kurt invited Katherine Mengardon, met via Galia Durant from Psapp. Mengardon reinvents and catifies the artwork of famous albums. With her, Blondie’s Parallel Lines becomes Parallel Felines. The man with the cabbage-head turns into a cat-headed man … “We had tickets for Kraftwerk in February, says the artist, and the pun came first. Katzwerk. Then the idea of ​​the Cat Machine. I wanted to try and this is how I gave birth to my first cat cover.”

Since childhood, Mengardon love Louis Wain illustrations on the covers of books by Lilian Jackson Braun. When little, she already used to draw humans with animal heads. “But generally rabbits.” Passion for music, photo, parody and cats (“I have four that I will soon transform in their own version of Abba”), she just catified fourteen pockets in seven months.

“Initially, I was interested in very stylized and rather minimalist albums. It was also, in theory, easier to achieve! But most importantly, I need a good pun to go with it, and a basic visual that makes the catification possible. I always start with a human version of my subject as a pencil sketch, then when I have the likeness down, I begin the transformation. ” She adds ears, whiskers, a nose …Inks and colours with felt tip. “All the basic work takes place manually. Then I go digital to refine some details.”

Mengardon perceive cats as facilitators. “Bonnard painted many cats in his paintings. Toulouse-Lautrec is known for his black cat. Hockney was made more human with the Clarks’ cat … We have such strong emotional links with them that they give us a familiar landmark, particularly when they are placed in a work of art. When asked about “cat artists,” I think Harry Whittier Frees the photographer, cartoonist, humorist and painter Albert Dubout or Alfra Martini and her Kitten Covers … ” Singer songwriter from Virginia Plain, Martini replaces with great humor pictures humans with cats on mythical album covers. Cool Cats …